Last night I was thrilled to be a last-minute invitee for lobster dinner put on by LauraLee and Bill Symes and their housemates, cooked to perfection by Chef and Grand Master sailor Alain Vincey from France. Today the Symeses celebrate their 10th anniversary. From what I can see, they'll be together for at least another 10 years--congrats you two!

Today was another gorgeous one on St. Margaret's Bay. About the same wind strength as yesterday.

Determined to have a more successful day, I got out earlier and did two 4-minute splits with Aussie sailor Stewart Casey. Both times, the left side paid off handsomely. The current was running with the wind. I was also flying downwind on the sails back to the start line.

Unlike yesterday I formulated a firm plan for the upwind legs, and fortunately it wasn't very difficult in light of the research: go left. Hard.

The first attempt at a start was a general recall, nice for me as I had a terrible start near the right side of the line. On the second go-around I started about 1/4 up from the left end of the line. Because of the current pushing us back there was a big sag in the line of boats--taking advantage of that, I got off clean and fast and motored out to the left. A few boats crossed me well up the leg but I kept going left and rounded the top mark in 4th. Gained a ton on the downwind leg and rounded right behind the two boats ahead. Regatta leader Scott Ferguson in 2nd and I went left, a fast Dutch guy in 1st to the right. For awhile the Dutch dude looked good out right, but then the right collapsed and Scott and I were launched (way out in front).

Scott had me by a pretty big margin at the top mark and blasted off on the reach. We stayed about the same distance apart on that leg, with him about 20 lengths ahead. By the next mark that had been reduced by half, and on the next reach I surfed right up to his butt. We had a little chat and took a moment to steal a quick look back at the fleet well behind before getting back to racing each other. He had a slightly wide rounding and I squeaked inside him with speed and immediately tacked to split with him. We had a little tacking duel and he pipped me at the line by maybe 3 seconds after over an hour of racing. After finishing Scott jokingly asked why I made him work so hard for the win instead of just taking it easy. 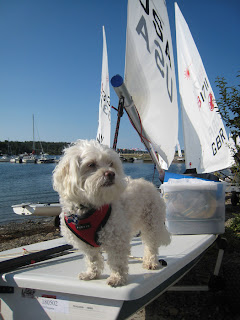 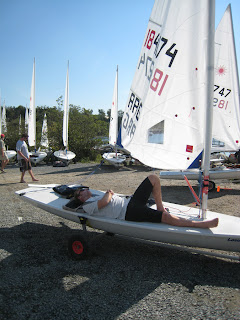