Sailing the past Sunday was a wild and wooly affair, with winds oscillating through a wide range of direction and strength. One minute it was 20+ knots, the next 3! Overall, the trend was heavy offshore breeze, with six races being run by PRO Ched Proctor and his team in very challenging conditions.

In the offshore wind fanning puffs were the norm, making it important to immediately get into phase with the shifts upwind. Unlike last week, tacking right as a puff hit was the order of the day. Given this situation, my aim was to start near (but not always at) the favored side of the line, with a lane to windward should a quick tack be called for. One time I even started on port, ducking starboard tackers. I lost a few boatlengths ducking them, but blasting off in-phase in the huge lefty more than made up for it.

The wind oscillations were about 20-25 degrees off the median. "Oscillating" means swinging back and forth, right? So if you're in a huge left shift, well away from the weather mark, does it make sense to sail higher than rhumb line when you know the next puff is coming from the right? Take a look at the diagram below (click on it to see bigger): 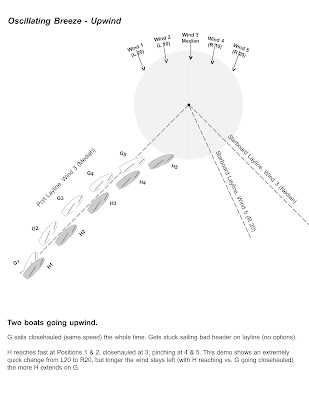 As can be seen, footing in the lifts and pointing in headers is the way to go upwind in oscillating wind. If these two boats were more in the middle of the course, the grey boat could easily tack to stay in-phase and cross the white one. Try it sometime!

Variable conditions like we had often force one to prioritize. Going upwind and transitioning from light to heavy, my first go-to is the vang. The vang has the greatest effect on overall sail shape, flattening the sail and moving draft back. If I have time and the puff is long enough, will also dial-in some downhaul (which moves draft forward and twists off the leech up top). If the puff is shorter in duration I leave the downhaul loose and really ease the sheet in puffs so the boat doesn't just heel over and stop. The outhaul is generally last to be adjusted.

Prioritizing is a big deal at mark roundings. At the weather mark in breeze, the first priority is getting the boat planing from the mark on a good wave in clear air. Vang is MINOR, downhaul is MINOR, board up is MINOR in this scenario. Watch this video posted by AJ Sorensen:

At 30 seconds, note the boat above me at the first mark, how it's spending time adjusting stuff (luffing high and going slow), and how many BOATLENGTHS I gain as a result. Even dealing with the mainsheet completely wrapped around my foot (42-48 seconds) doesn't deter me from keeping that boat planing toward the next mark!

Note also how I wait until 1:28 to ease the downhaul and raise the board--using a lighter spot to lean in and adjust.

Huge gains can be made by doing the most important things first, especially in extreme conditions.