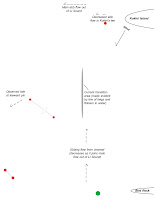 (click on the image at left to see a bigger version)

With the fleet becalmed trying to reach the starting area, this Sunday didn't start out very auspiciously. Those who bailed early missed an awesome day of sailing, however! At around 12:30, the wind came in with a BANG, allowing PRO Mike Matan and his team to click off five long races in 12-6 knot SW breeze.

With the weather mark up near Cockenoe Island, and the leeward gate to the east of Saugatuck Harbor channel, the ebbing tide played a big role. As always, I checked the tide before each race, and was surprised to find it was heading only 20 or so degrees east of the wind near the starting area. Given the proximity to the channel and the general ebbing direction further out in the Sound, I would have expected a more easterly, or even southerly, flow. I surmised that the tide would be much more southerly to the right of the course, where the tide coming out of the channel would have more effect.

Geography was also a key factor. Cockenoe Island tends to block the ebb, and also the wind in a SW breeze, so my plan was to approach the weather mark on port to minimize the wind effect and maximize the tidal one. Leaving the top mark, I sailed quite high to: 1) get away from the wind shadow made by the fleet approaching on starboard; 2) get away from the lee of Cockenoe; 3) position myself away from the more southerly flow coming out of the channel (which would have a progressively larger effect the further one got down the run); and 4) get myself over to the NE tidal flow that was evident near the start line.

Most of my first beats were serviceable, if not fabulous. A couple of times I was pinched off soon after the start, forcing a clearing tack. Knowing it was important to not bang the right corner because of Cockenoe's effect on the wind, I would tack back as soon as a clear lane was available, then try to sail fast forward to try to gain some fore-and-aft position on the boats to leeward. Given the variable wind strength, there was a lot of back-and-forth, and it took discipline to keep sailing on lumpy starboard when the boats to leeward would be sailing higher and faster in a puff (and something else, which I'll mention later!).

The runs are where I made my moves. I really appreciated the boats ahead and around me bearing 20-30 degrees to the left of rhumb line at the top mark, slowing themselves down in the lee of the fleet and Cockenoe. By heading high then bearing off to ride the first big waves, I was able to gain 3-5 boatlengths straight away. Toward the middle of the leg the boats to my left moved forward some, but not enough (in my mind) to justify the extra distance they sailed. The latter 1/3 of the runs were very satisfying, as the boats to the left, now sailing into the strengthening adverse tide coming out of the channel, had to head up to a dead run (going slowly) to get to the gate. Sometimes I'd gain 20 boatlengths on one run!

The leeward gate had a right pin (looking downwind) favor all day. Early on it made sense to round that pin, because going around the left would have meant sailing into the wind shadow and disturbed waves made by fleet coming downwind. As the day progressed however, more people were sailing closer to rhumb line on the run, making the starboard tack off the right pin more lumpy and slow. In addition, the strengthening tide coming out of the channel helped those on the right make massive gains: in the third race, Steve Fisk went from 4th or 5th to a solid 1st by going right. Failing to learn my lesson from Race 3, I tried the left side of the final beat again in Race 4, and went from 2nd to 7th or 8th!

The final race started at around 2:40, after a little delay caused by the RC moving the top mark further right and a bit closer. I knew it was going to be the last race, and was determined to take all I'd learned to finish decisively. The RC also made the pin irresistibly favored, so I started in that quarter, tacking soon after to free myself from a boat close to leeward. I was JUST able to cross two boats while sailing on the favored port tack, then tacked back in a slight header onto starboard. I was determined to be more middle-left than right on this beat, because I had seen so many guys come out on top from that side. Sure enough, I encountered something different here--a COUNTER CURRENT going perfectly behind me on starboard! THIS must have been what was allowing the boats to leeward of me to scoot forward and higher in those earlier races!

A few boats that were further to leeward tacked over and were crossing. Normally I would have tacked to leeward and ahead of them to avoid their wind shadows and to lead back to the middle, but I wanted to ride the counter current for as long as it lasted so I waved them across. The counter current held to within a minute or so of the port tack layline. I tacked over to port and, even with the left collapsing a bit toward the end, rounded the top mark first!

I think a lot of people didn't take the course shift into consideration, and sailed their old angle (now even FURTHER off rhumb line) down the run. This allowed me and James Harvey to really break away from the fleet. Determined to not repeat my previous error, I rounded the LEFT gate on port and found lovely breeze and nice smooth water--no wonder this side paid off before! Did a few tacks to stay in touch with the fleet and finished the final decisively, just as planned.

BOAT SET-UP:
The wind was rather up and down, and sailing on starboard in the lumpy waves with chop on top was challenging. As the day wore on I sailed with looser and looser outhaul and downhaul to keep power up, using my vang as a quick depowering device when needed in the puffs. If the puffs were longer in nature, I'd pull on some downhaul.

During the debriefing and pizza session after racing, PRO Mike mentioned that I seemed to be sailing with a consistent and noticeable amount of heel--not dead flat, not way over. When conditions are variable I like to do that, because it gives a little safety net of heel should one encounter a light spot--if the boat was dead flat, it would heel to windward. Also, the boat seems to go through that chop better with a bit of heel, and water that comes over the deck tends to slide harmlessly off to leeward instead of filling the cockpit. This technique worked on starboard, but on port I tried to sail the boat dead flat, as the waves were more on the beam.

Downwind, I saved by-the-lee sailing for light spots or to catch waves. In puffs, I headed UP, to dead downwind, allowing me to get back to rhumb line and also sail longer in the puffs. There is a tendency by many to bear off even further in puffs, but that just means one is further off rhumb line, usually on a bad reaching angle, when it's time to get to the mark. Try it sometime!
Posted by Marc Jacobi at 7:55 AM 1 comment:

Eight hardy sailors ventured out Sunday, 30 October 2011 for a good hard day of frostbiting. A gusty, phasing Northerly swept the fleet to the racecourse and allowed 5 races to be sailed in velocities ranging from 10-25 knots.

Because the wind was phasing, I found it very important to get onto the lifted tack as soon as possible, to stay in synch with the shifts. The phases usually didn't last an entire leg, so banging a corner definitely didn't work. At the beginning of the day the breeze was forecasted to go a bit right, and I had success working that side of the fleet. In addition, the tide was still rising early in the day, so being right meant one got a little bit of current help on starboard toward the top of the beat (the weather mark was set near the channel).

We did a number of Harry Andersons, and in the beginning the first reaches were very broad. This, and the puffy conditions, made it very challenging to keep speed up the whole leg. The second reaches were full on blasts--I found having the right amount of vang (tighter than one might think) was very helpful, and when the breeze was full on I tightened the downhaul a bit to keep the draft forward.

The sea state were very choppy/lumpy upwind. For the really big swells I scooted back to the center of my hiking strap, hiked, sheeted out and sailed fast. For lesser sets of bumps, I found keeping my feet forward but hiking diagonally back was enough to keep the bow up, and in the flatter sections made sure to scoot forward to the usual place.

With the breeze so up and down, it was important to keep changing gears, easing vang and even downhaul to stay powered up. I think a lot of us, myself included, tend to keep everything really tight in lulls, kinda dreading pulling everything back on when breeze goes back on. That may be easy, but it's not fast.

Finally, a word about clothing choice. In the locker room most guys were going with wetsuits and spray/dry tops. That day I couldn't find my fleece gear and used three rash guards under a shelled jacket. It wasn't enough, especially after capsizing, and it took EVERYTHING I had to recover from a double capsize because of a super-tight vang going upwind. My basic suggestion is to dress WARMER than you think you'll need, since it's better to be too hot than hypothermic. You can darn well bet I'll be putting on the drysuit (or at least a few layers of fleece under a spray/dry top) next time I'm looking at 20+ knots on the water!

Hope to see you all at the Frostbiting Invitational regatta this coming Saturday! Contact Joe the Fleet Captain at 203-912-6855. or email him at jnice1@optonline.net
Posted by Marc Jacobi at 2:46 PM No comments: