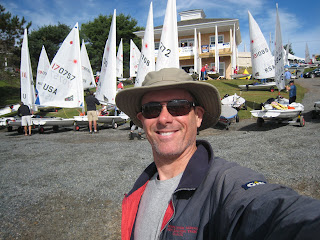 Oh boy, what a day! With the wind coming from the North (off the land) it was SHIFTY and PUFFY out there, the kind of day where one could go from hero to zero and back in a matter of moments!

Before the start I tuned a bit with Apprentice (35-44 yr age group) sailor Peter Hurley from New York. We split tacks, he going left and me right, and after 4 minutes of sailing to our respective sides we tacked back to the middle of the course to see who would come out ahead (sailors typically do this to see if there are any big geographic elements, like tide or land influence on the wind, on either side of the course). I led him by nearly 30 lengths--a huge amount. Later I watched two other fine sailors do the same thing--that time the left paid huge. Obviously, there wasn't some big geographic favor to one side or the other, just darn shifty winds!

The first race I got away fairly clean from the right side of the start line but felt compelled to immediately tack to the right. Then I waited. And waited. And waited for a shift to come back on, all the while the boats to my left (which had tacked over like me, only a bit later) were in stronger breeze and pulling away. ZERO! Eventually I got a little hint of a right shift and came back to the middle. It wasn't as horrible as it could have been, and I worked a number of small shifts, thinking I did ok (HERO?) until I saw a guy who was behind me at the start come barreling in from the RIGHT (apparently, HE found something good to come back on). I rounded the top mark in the high teens. ZERO

The next leg was a very light air reach, scary to be sailing in traffic. The boats ahead ran into less wind and the fleet tightened up considerably by the time we got to the gybe mark. The run was fairly uneventful, and the next upwind leg was full of wind holes and huge shifts. With the wind tumbling down off the land, it would hit the water and fan out. When you got a shift you had to immediately tack over to be on the outside edge of the shift, which would then lift you up and up compared to those who dug deeper into the new breeze before tacking--it was classic, off-the-shore sailing. I rounded the top mark in about the same position I'd rounded the prior, but was closer to the boats ahead.

The next run was interesting. Most of the boats ahead sailed hard left looking downwind, way off the direct route (rhumb line) to the next mark. I didn't see them having enough of a speed difference to justify sailing so far off the rhumb line, so instead sailed a more direct course to the mark with decent speed. It was the right move: I had more breeze and a better angle to the next mark! The breeze built and I started surfing, while the boats to the left were busy playing with each other, slowing each other down. I wanted to work left to get inside for the next mark, but had to choose the right time, catching a nice wave in pressure to pull ahead of American Mark Bear just before the mark, rounding in the top 8 or so (HERO!). Held onto that for the reach, then caught a few more boats on the short beat to the finish to end up 5th--it was an exhilaring end to a gut-wrenching, terrifying race!

Had a nice start in the second race but the guy just below me got a smidge more breeze and pulled ahead, messing with my wind. Instead of being patient and waiting for the fleet to clear out a bit, I tacked away early. It was unfortunate, as there were a lot of boats and disturbed water I sailed into. After a few more clearing tacks I was well back in the fleet (ZERO)--time to get to work! Concentrating on keeping speed up and the boat pointing toward the mark, I worked a number of seemingly erratic shifts and rounded again in the high teens--quite the comeback. By the end of the next two legs I'd pulled all the way up to round just behind the top 5 or so at the leeward mark. HERO!

For the first half of the upwind leg I stayed on message, working the shifts as they came. It was so erratic out there--one could either be in 5th or 15th at any given time. The last half of the leg we had to contend with another fleet sailing downwind from the mark we were aiming for. Sailing through them wasn't a good idea, as they would take one's wind, so it was decision time: stay left like the majority of the leaders, or...?

I decided to go to the right of the pack coming downwind. I didn't really have a reason, just that I thought splitting with the leaders might give me a better chance to pass. I didn't see any better wind on the right. I had to sail in light winds to get over there. The wind angle wasn't particularly good either. In other words: the decision had no basis in sound reasoning and I paid the price, falling WAAAY back and losing a solid 10+ boats. ZERO! The fleet had figured out how to sail downwind so I couldn't split with them on that leg, and the reach was a follow-the-leader affair. I did manage to catch about 3 boats on the short final leg to finish 17th, my worst result so far in the event. Lesson re-learned: 1) do the percentage moves; 2) only make decisions based on EVIDENCE; and 3) be the Terminator (never give up)!

We're now halfway through the event, and qualifying is over. I have easily made it into the Gold Fleet: my finishes having me in a tie for 6th overall (6 points out of 2nd), and 6 more boats (including two former world champions) breathing down my neck within 6 points behind--it's close out there!

Tonight the club hosted a nice party and dinner. The sailors are a great group of people from around the world, and it's so nice seeing everyone chatting and making new friends. 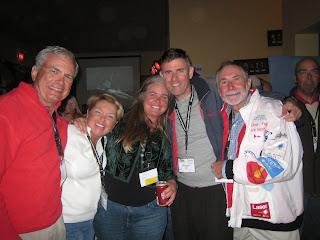 Tomorrow is a lay (rest) day--I'll thoroughly check over the boat and all its fittings for any damage, then maybe do some laundry or sightseeing, then get in a hot soak or sauna somewhere before a nice meal and early night in bed.
Posted by Marc Jacobi at 2:21 PM