The 2019 RS Aero World Championship ended yesterday, with no races sailed on the first and fifth days due to high winds. Nonetheless, we sailed 11 excellent races in 3 days, in winds ranging from 6-20+ knots.
In the 7 fleet, 23-year old Rhett Gowans was wicked fast and smart the whole regatta. He really hit his stride in the last days, getting increasingly fast upwind while retaining his downwind superiority. Rhett handily won the last 7(!) races of the event.

I was fortunate to place second to Rhett. Was a touch faster upwind in strong breeze, generally competitive reaching (when not affected by nearby wakes), but couldn't keep up with Rhett's blistering pace on the runs, especially in stronger winds. The lack of downwind boatspeed (compared to Rhett--the two of us were a notch above the rest of the fleet), combined with poor first beats (after generally good starts) in the latter days, meant climbing back through the fleet was my mission, not challenging Rhett for the front. 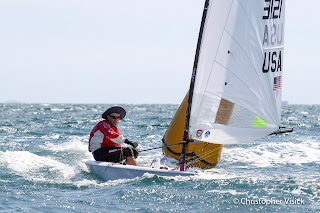 19-year old Noah Rees from GBR came in with Top 10 aspirations and ended up placing 3rd overall. Quite quick at times upwind and down, strong and fit, we expect several more podium finishes from the ever-improving Noah in future!

Now it's time for rest. I'm in a dark room away from the sun, doing laundry on a rare rainy day and enjoying a bit of solitude and relaxation.
HUGE thanks to SailStar (www.SailStar.org) and Tomas Sandström (corporate sponsor of this effort), and all those who contributed to my gofundme campaign. Additional thanks to Andrew Giles and his lovely partner Elaine for allowing me to stay with them during the event and being such pleasant companions this past week.
Results: https://www.clubops.com.au/DisplayResults/DisplayPublicSeriesResults?Id=491&Id2=
Sailing photos by Christopher Visick
Posted by Marc Jacobi at 8:36 PM No comments:

So, first day of racing in the new year! Got to the club early to effect repairs suffered the previous day of racing (many thanks to Sammy Issacs-Johnson for splicing the lines!). Three races sailed today.

Race 5
Light-ish wind for the start of this one. Had a great start at the boat, but missed a few shifts and rounded in 5th behind Noah Rees (GBR), Andy Mack (USA), Michael O'Brien (AUS) and Rhett Gowans (AUS). Rhett got around Michael on the first reach but I stupidly tried to go low and got caught behind Michael, who wasn't going terribly well. Rhett sped off and caught Noah on the run to pull out to a big lead. I gained a ton on the first run to round third, then climbed to second by the second weather mark and held to the finish.

Race 6
The breeze built a bit for this one. Had a ripping start at the pin end of the line and leapt two boatlengths ahead of the fleet within 30 seconds. Easily crossed the fleet and led at the top and reach marks, but Rhett once again turned on the afterburners and was leading by the leeward gate. I gained upwind and by the middle of the leg was overlapped with Rhett, but he played the shifts a bit better on the upper half and had a 3 length lead by the second weather mark, from which he extended on the run to easily take the race.

Race 7
Had a good start at the starboard end but couldn't get the boat to settle down; it just felt cranky and slow. Rhett led at the top mark and extended for another decisive win. I ground down people on the runs and beats to score another 2nd place finish, but frankly didn't have much gas in the tank for this one.

Synopsis
Obviously, Rhett's flying downwind, steering big angles to catch waves. I'm doing the same, but not as loosely and confidently, and it shows. Also, I didn't get a good night's rest before, so didn't have the energy needed for three big races. Totally my fault.

Gotta stay high on reaches and away from others' wakes. There's no way to pass if stuck on another boat's quarter-wake.

Tomorrow we're scheduled to do 4 races, so it's early to bed for this guy. Let's see what the day brings!
Posted by Marc Jacobi at 3:12 PM No comments: