Champagne sailing for the first day of the RS Aero US National Championship at Cascade Locks, OR. Wind started out at a moderate 10 knots and ultimately built to about 22 in the puffs, with very hot temps (high-80s/low-90s) warm, fresh water to sail in and beautiful sunsets--paradise! 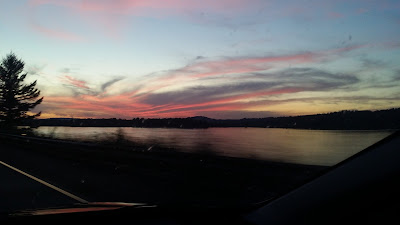 4 races were sailed today, with all three rig sizes (9, 7 and 5) starting together but scored separately. Sailing a 9, I won Race 1 handily, and while not leading at every mark, did have very good running and (especially) reaching speed, which allowed me to pull ahead of Dan Falk from Seattle, WA and the rest of the fleet. Unfortunately, I'd been over early at the start, which nullified my result. Not a great way to begin a regatta!

In Race 2 I again rounded the first mark in the top 4 or so and ground my way to the top. The breeze was increasing, and the 7 (mid-size) rig sailors were coming into their own upwind, especially International Class Manager Peter Barton from the UK. It seems the 7, which has a much more flexible rig than the 9, can't point as high but sails faster forward upwind. Makes for interesting tactics, especially for 7s that are to windward of 9s off the start line and trying to hold their lanes...

By Race 3 the wind really starting to pump up. I was having a good race, planing by-the-lee into 2nd behind Dan Falk on the first run and gaining rapidly when a big gust came through. My bow dug into Dan's wake and went down down DOWN, with water almost to the daggerboard trunk before the transom flew up into the air, rudder completely out of the water and throwing me off the boat! It took a while to get the boat back upright and moving again, but after a solid upwind leg I turned on the jets downwind and zoomed up into 4th overall and second 9 rig. Dan Falk sailed fast and steady for second overall (to Barton) and the 9-rig win.

Race 4. Ah, Race 4... Decent breeze again, with Falk and Barton getting off the line well and ahead of me at the top mark. Again I was fast downwind, passing Barton and pulling within a boatlength of Falk by the leeward gate. Falk headed up around the unfavored starboard gate mark on port tack and I gybed around the port mark. My adrenaline was really pumping and I rolled the boat too hard, which caused the boat to flip over! With the current going upwind, it was a major scramble to get the boat upright and borne off before hitting the mark, but I was *just* able to do it. Of course, two or three boats managed to pass while I righted the ship, so David Brink and another boat were ahead on the long starboard tack to the Oregon shore. Managed to squeeze off Brink and pull a little bow-forward of the other boat, then we tacked over onto port at or very-near the layline. I managed to pull ahead of the other boat by the weather mark, with Falk, Jay Renahan and Barton 1-2-3 well ahead.

Falk had another super run and pulled out to a huge lead, with Renahan 2nd. Carlos Abisambra from Seattle and I managed to leap ahead of Barton by the bottom of the run, but once again I wiped out at the leeward gate! Carlos capsized trying to avoid me, allowing Barton to snake past us both. Carlos and I got our boats up quickly, but in the breezy conditions Barton and Renahan had sped off. I managed to round the final leeward mark within a boatlength of Barton and 7 lengths of Renahan after the two reaching legs, but Barton took a short hitch onto starboard soon after rounding the leeward mark, allowing him to get a bit of the left shift off the shore and an almost direct line to the favored committee boat side of the finish line on port to hold me off and close within a boatlength of Renahan.

So. 4 races done, 4 more schedule for tomorrow. With the throwout that will come after Race 5, I am one point behind Falk in the 9 class--certainly within striking distance. Need to sail a bit more conservatively, avoid the big mistakes and let my reaching speed do the talking. Let's see how prophetic that last sentence is tomorrow!