Drizzly, grey skies in Carnac for the last day before Worlds. RC postponed ashore for an hour then sent the fleet out in a dying southwesterly for the practice race.

The forecast was for the breeze to go left until about 2, then go right and build. On the way out, staying left seemed to work, confirming the forecast. The breeze went a further 20 or so degrees left, forcing the committee to postpone our start while they shifted the course to compensate. Still, the start line was very left-favored.

Most of the 9s realized the left favor and started at that side of the line. I punched out early from the fleet and managed to tack and cross the fleet after a minute or so of sailing. The waves were quite confused and I was having a bit of trouble keeping going, allowing my training partner Madhavan Thirumalai to sail through to leeward. At one point it looked like he was really launched, but I managed to play a number of small shifts/puffs to squeak into the lead at the first mark.

The first reach was very light and difficult due to the sloppy seas. The jury boat came and observed us for nearly half the leg, which was a bit unnerving. Since this was only a practice race I asked if we were OK, to which the judge replied "barely!" Right on the line, that's where one wants to be! ;)

The breeze was really dying by the time we got to the reach mark, and further died on the second reach. About 2/3 to the leeward mark the race committee sent a RIB to tell us they were abandoning the race, and to head home. The shoreline wasn't really visible at that point, so I just aimed my boat in the approximate direction of home. Was close enough. :) 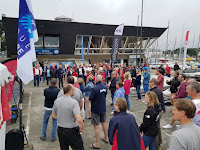 Opening ceremonies followed at 1800 hours. International Class Manager Peter Barton reeled off some impressive stats: 96 entries from 16 countries and 4 continents for this, the very FIRST, RS Aero World Championship. Am so stoked to be part of history in the making!

After awards had a lovely dinner with 5 other sailors. Now I'm back at the flat. Clothes and food for tomorrow are all laid out, I'm freshly showered and ready for bed. Big day tomorrow!
Posted by Marc Jacobi at 3:30 PM